Dr. Geetanjali Akerkar Chosen as Leader for Women in Medicine 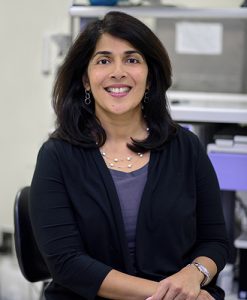 Geetanjali Akerkar, M.D., AGAF, describes herself as a compassionate healer, lifelong learner and strong advocate for her patients. A gastroenterologist who specializes in liver disease, inflammatory bowel disease and irritable bowel syndrome and a dedicated mother of three, Dr. Akerkar is the chief financial officer of Digestive Health Specialists and president of Lowell Anesthesia. She is also a founding member of Northeast Endoscopy and sits on the board of directors. Dr. Akerkar has an appointment at Harvard Medical School and serves on the board of the Massachusetts Gastroenterology Association.

“Medicine allows me to utilize several strengths at once,” she said. “It requires quick analysis and interpersonal skills.”

She is particularly passionate about gastroenterology (GI) because she treats patients of all ages and a diverse range of conditions including infections, autoimmune diseases and cancer.

“I have to think of the whole body because symptoms could represent disease in other organ systems outside the GI tract.”

In other words, gastroenterology keeps her on her toes.

Dr. Akerkar’s patients say she is a gifted communicator, a quality she honed many years ago while on the competitive debate team at Cornell University.

“Patients tell me I explain things well and that I’m compassionate and direct,” she shared.

These qualities are essential in a physician, especially when delivering difficult news like a cancer diagnosis.

“My compassion gives patients hope, and the directness gives a sense of urgency to move forward with treatment.”

Providing excellent care is one of many reasons Castle and Connolly named Dr. Akerkar a Boston Top Doctor for the third year in a row. This honor motivates her to offer cutting-edge technology to her patients.

“Medicine and gastroenterology are moving targets,” Dr. Akerkar said. Ongoing training allows me to provide my patients with a wide variety of therapy options as well as the most current treatments.”

Most recently, Dr. Akerkar trained to learn a procedure called Barrx, a new radiofrequency ablation treatment for Barrett’s esophagus. A strong advocate for her patients in the Greater Boston area, Dr. Akerkar explained, “My mission is to provide the best local care to my patients and the best access to tertiary centers. Because I’ve lived in Boston for 20 years, I have the connections to get patients with rare conditions to the right facility for complicated surgeries.”

Being a Female Physician Leader

Several women played a key role in mentoring and encouraging Dr. Akerkar on her path to becoming a female physician leader. Teresa Wright, M.D., head of liver disease at the University of California San Francisco and president of the American Association for the Study of Liver Diseases, mentored her as a GI fellow and invited her to co-write and publish. Doree Barton, M.D., founder of Digestive Health Specialists, provided an example of strong female leadership and dedication to quality patient care. Dr. Akerkar is currently the only female in her practice group, and she attributes the mutual respect among the physicians regardless of gender to Dr. Barton’s pioneering efforts on behalf of female physicians.

Dr. Akerkar said she feels privileged to dedicate her time to support the professional growth of other female physician leaders. The American Gastroenterological Association hosted a Women’s Leadership Initiative, and Dr. Akerkar participated in its inaugural year by working collaboratively to improve gender equality and to foster sponsorship and mentorship among GI physicians. She recently accepted an invitation to serve on the President’s Council of Cornell Women where she will promote advancement of female faculty and students. Women are still underrepresented in gastroenterology and other procedural and surgical specialties, but Dr. Akerkar sees this as an advantage.

“Many women shy away from procedural or surgical specialties because of the call schedule. While the training process is more rigorous, these fields seek women and therefore, present unique opportunities.”

Before she joined Digestive Health Specialists, Dr. Akerkar took time off to be at home with her twins until they were a year old. Because she was well-trained, she was confident in her ability to return to a full-time position. Her practice prioritizes family, and she has tried not to miss sports games and concerts.

“I tell my female mentees, ‘If you have a passion for a specialty, go for it. When you are one of few, you actually have more control over your schedule.’”

Young female physicians must be heeding her advice because women will comprise about half of the next generation of GI fellows. Dr. Akerkar is amused by the tangible evidence of this change – as she sees the line for the women’s restroom growing longer every year at annual GI meetings.